In a recent Mathworks white paper on Machine Learning for Space Missions, PANGU is suggested as an image generator to train deep learning algorithms for navigation and guidance.

PANGU v5.00 was released on 2019-Sep-08. It includes the ability to pass images directly to ffmpeg (or similar) for MP4 movie output from the viewer, a new tool called pan2cad to convert PANGU models into CAD formats (OBJ, STL, Collada), and the ability to import OBJ files into the surface modeller as ICQ files for asteroid/small body modelling. PANGU can increase the resolution of the imported OBJ/ICQ files, add craters, boulders and albedo/colour maps as shown below.

Radiation modelling in the viewer has been updated to resolve issues with earlier releases: charge can be deposited equally into the RGB channels rather than being split into three, and cosmic ray trails that cross can increase charge in intersecting pixels rather than replacing. The original behaviour is used by default for backwards compatability with the new settings applied to the v5 example models and reference INI files.

PANGU v4.50 was released on 2018-Dec-21. It extends the optical distortion model to include tangential distortion, adds support for detector reset/read-out smear and adds scattered light modelling via multiple weighted Gaussians. A Qt5.6 version of the PANGU viewer has been added which ought to be more usable than the Qt4.6 viewer on retina/hi-dpi screens. 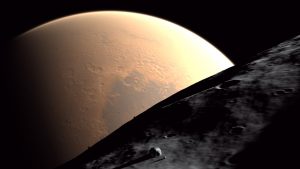 PANGU v4.30 was released on 2018-Sep-07. It features the ability to add albedo/colour variation to asteroids, define BRDFs for boulders, and includes scripts to simplify generating videos from PANGU simulations.

Note that this release has been superceded by the PANGU v4.50 release.

PANGU v4.20 was released on 2017-Jun-30. The surface modeller Java GUI has been updated to improve asteroid modelling support such as the addition of DEM extraction. The rendering GUI has been updated to support non-linear zooming in model-view mode and improved message logging. A full list of changes can be found in the ChangeLog.txt in the installation.

Note that this release has been superceded by the PANGU v4.30 release.