This page contains links to videos generated using PANGU showing different scenarios and techniques. Please note that the videos are stored outside this site: clicking on the links will take you to the YouTube site where they are hosted. 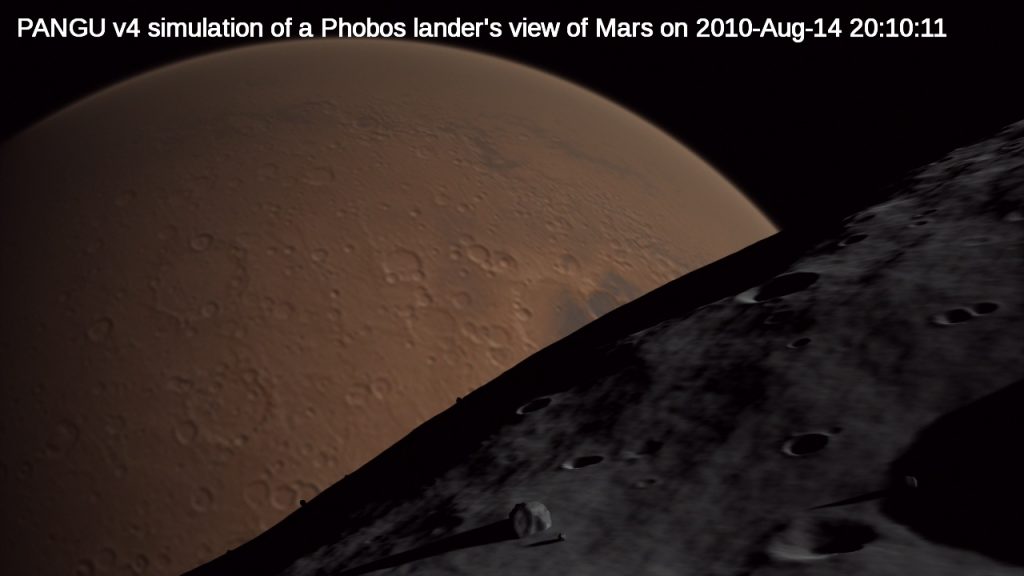 PANGU v4 simulation of a hypothetical Phobos lander’s view of Mars in August 2010 (on YouTube).

This video demonstrates the use of SPICE kernels for the positions and orientations of the Sun, Mars and Phobos, the use of dynamic objects with a high resolution model of Phobos, and the GPU-based atmosphere model for Mars. This is what it might look like to observe Mars from a camera on-board a hypothetical Phobos rendezvous and lander mission in 2010. The camera is stationary above the surface of Phobos looking in a fixed direction towards Mars. The video covers three orbits of Phobos around Mars which is nearly one Martian day (a sol). Although the camera and Phobos are fixed, Mars can be seen to move slowly about the field of view due to the libration of Phobos. 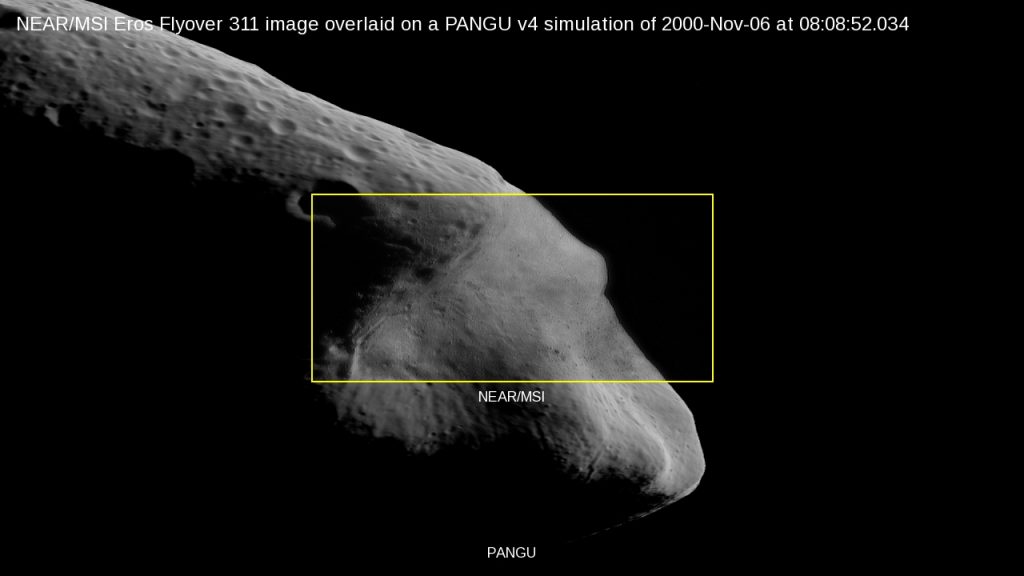 This video recreates the view from the NEAR/MSI spacecraft as it performed a fly over around asteroid Eros. The central region inside the yellow box contains real (full-size) MSI images. These are overlaid on a PANGU simulation with an Eros model using SPICE kernels for the positions and orientations of the MSI camera, Eros and the Sun. The PANGU camera model was configured with the same size pixels as MSI but covering a much larger area of the image plane, Not only does this provide a great view of what the spacecraft was doing at this precise moment in time, it also shows how well PANGU can recreate the same scene. This gives confidence that PANGU images of other scenarios can be equally realistic even if real images are unavailable for comparison. 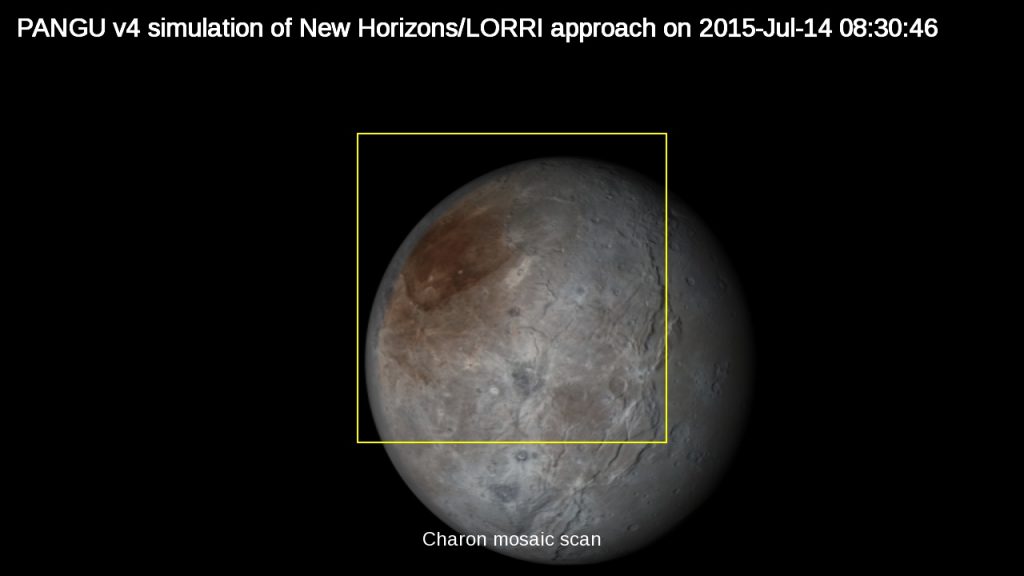 PANGU v4 simulation of New Horizons/LORRI on morning of Pluto flyby on 2015-Jul-14 (on YouTube).

This video uses PANGU to show what the New Horizons spacecraft was actually doing as it approached Pluto on the morning of the flyby in 2015. It recreates the LORRI view (marked by the yellow box) using images generated by PANGU at two second intervals using the real trajectory and camera motions and replayed at 30Hz (60x real-time). The gridded imaging strategy used to capture images of the smaller moons can be seen in the first part of the video. The same technique is also observed in the last part of the video when LORRI captured images of Pluto and Charon because they were too large to fit into a single image at this point. 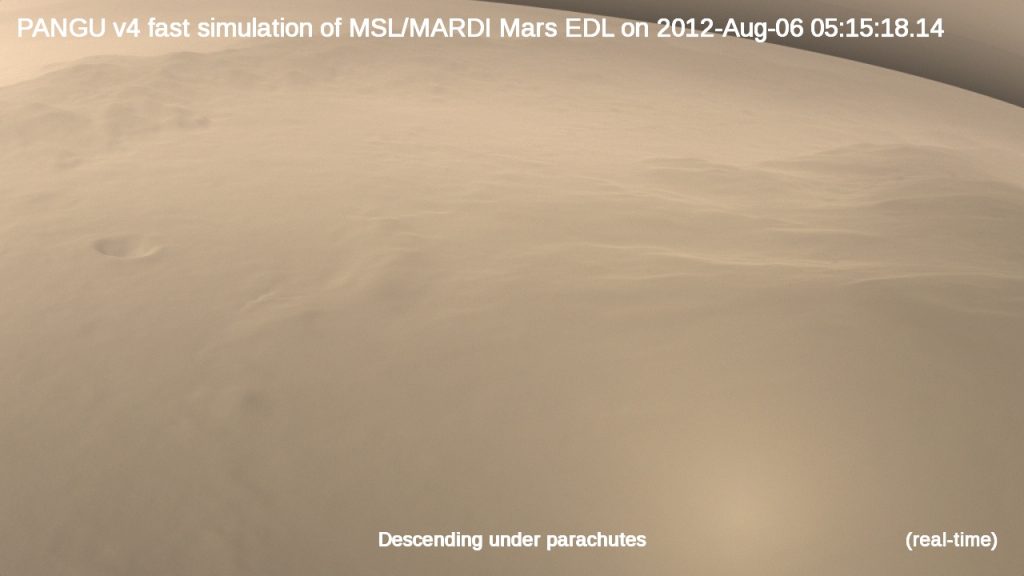 This video used PANGU to generate images from MSL (Curiosity) MARDI camera view point as it approached Mars, entered the atmosphere and landed in 2012 using the actual trajectory data. The sequence starts at 10x real-time covering the eight minutes before the spacecraft entered the atmosphere (and before the real camera was able to take pictures). Then it slows to 5x real-time covering hypersonic guidance until parachute deployment. The low frequency “bobbing” effects of the atmosphere are more obvious here than in the PANGU real-time version of this video (see next section). Finally the sequence slows to real-time covering the period where the real MARDI camera captured images until landing (see https://youtu.be/RyBffhiOuVU; opens in new tab). During the descent, a bright area on the ground corresponding to the Hapke opposition effect can be seen; this matches the position of the same effect in the real MARDI images. The video ends with “wheels on the ground”.

The Mars model used in this simulation started from a 50m grid resolution digital elevation model (DEM) of Gale Crater which was resolution-enhanced by PANGU adding fractal detail and craters up to 150m in diameter, providing a model with a 0.1m grid resolution at the landing site. The resulting model was then stitched into a 4km grid resolution MOLA whole-Mars DEM by PANGU to support the long distance/orbital views at the start of the video. 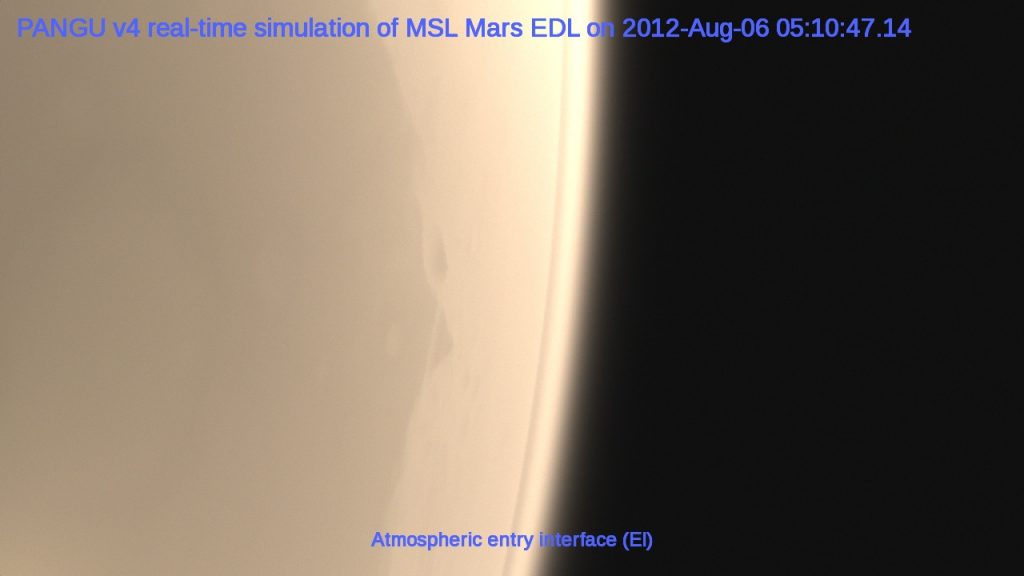 This is a real-time version of the MSL (Curiosity) MARDI video in the previous section.  It uses images generated by PANGU at 1/30 second intervals covering the “seven minutes of terror”; the field of view width is approximately the same as MARDI (73 degrees). The sequence begins shortly before atmospheric entry interface (EI) which is 5 minutes before MARDI started capturing images. During this period the camera was behind the heat-shield so could not observe these views. It is even possible to see a 0.2 second jerk at 05:15:05, which we believe to be from the deployment of the parachute before it unfurls and the camera starts shaking violently. The video ends with “wheels on the ground”. 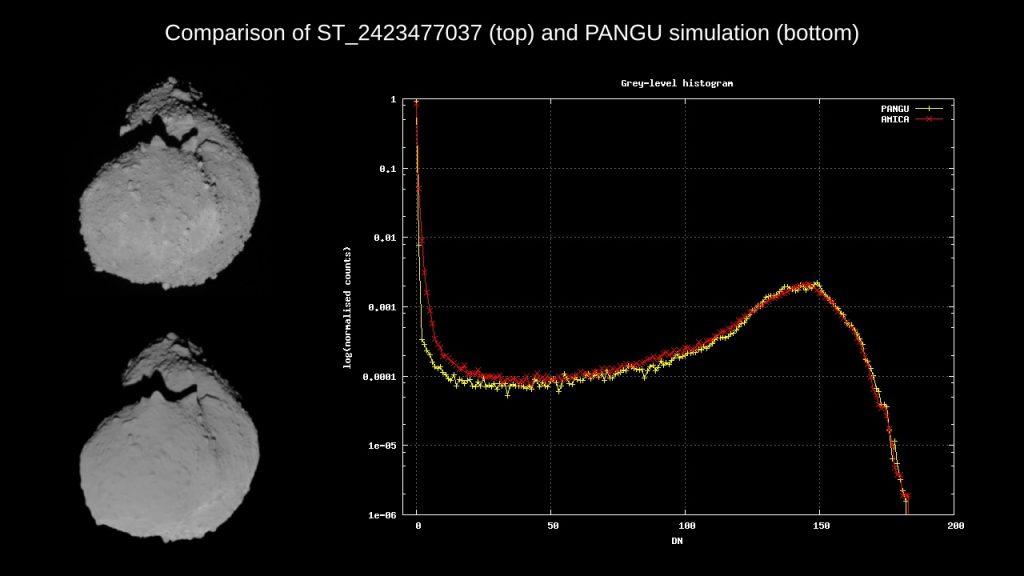 PANGU v4 simulation of Hayabusa/AMICA observing a rotation of Itokawa on 2005-Oct-01 (on YouTube).

During the end of 2005 and the start of 2006, the Hayabusa spacecraft of the Japan Aerospace Exploration Agency (JAXA) caught up with asteroid 25143 Itokawa and maintained a station-keeping orbit with it around the Sun. Amongst the AMICA images captured during this period is a sequence of 132 images taken at approximately 4 minute intervals on the first of October 2005; the images cover a complete rotation of the asteroid. This video shows what AMICA would have observed during this period if it had been able to capture images at 30s intervals. The video plays at 900 times real-time and shows how the spacecraft adjusted its attitude to keep Itokawa in the field of view: the movements are from the real trajectory data of the spacecraft. Any of the images from real AMICA sequence can be compared to the corresponding image in this video to evaluate the realism of PANGU. 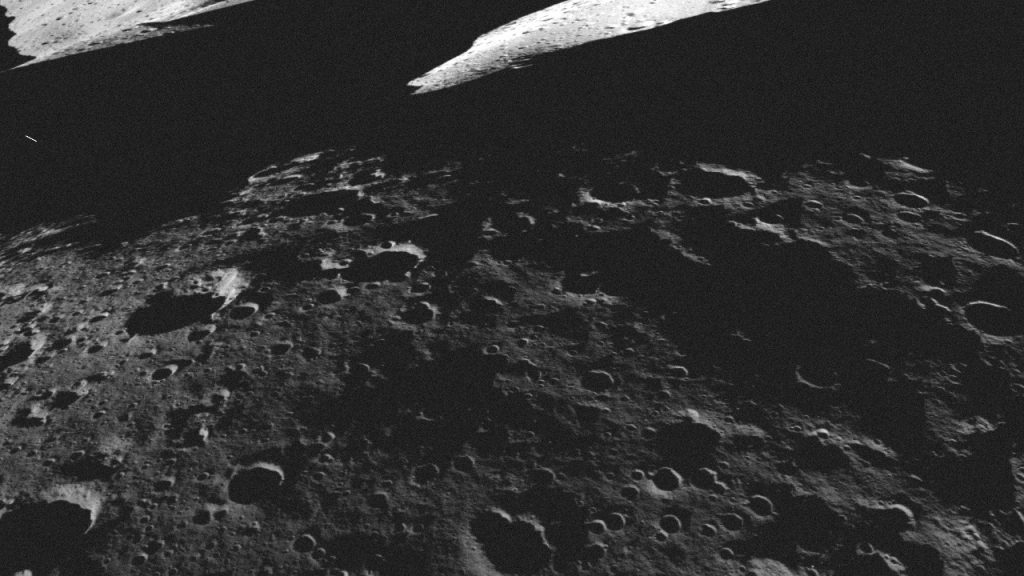 PANGU v4 simulation of a Lunar Lander descent onto Malapert mountain (on YouTube).

Malapert Mountain, near the south pole of the Moon, is expected to have long periods of daylight and short periods of darkness. This makes it an interesting target for Lunar missions: most parts of the Moon have 14 consecutive Earth-days of very hot Sun light followed by 14 Earth-days of extremely cold darkness (one Earth month). This video shows the end of a proposed Lunar Lander trajectory which began at an altitude of about 100km above the north pole of the Moon. The “double-divert” trajectory has two hazard-avoidance manoeuvres shortly before landing which are designed to exercise the automatic tracking ability of vision-guided landers. The PANGU camera model uses a 70 degree field of view with optical distortion matching that for proposed landers. The radiation environment and noise properties of the PANGU detector have been set to high values for this video to emphasize the power of the PANGU camera model. Normally the properties of a real camera would be tuned to avoid visible noise.

The lunar terrain model in this video was created from a 240m resolution Lunar Reconnaissance Orbiter (LRO) digital elevation model (DEM) covering Lunar latitudes 60S down to the south pole at 90S. The DEM was re-sampled to 480m resolution to reduce artefacts and then enhanced by PANGU with twelve 3880×3880 DEM layers to give a resolution of 0.12m at the landing site. PANGU craters with diameters in the range 1m to 480m were added using statistical distributions for a heavily-cratered surface; boulders with diameters in the range 0.5m to 15m were also added to the landing site area. The surface was rendered using the Hapke bi-directional reflectance function (BRDF) and a static, per-vertex, shadow map based on a point source Sun. 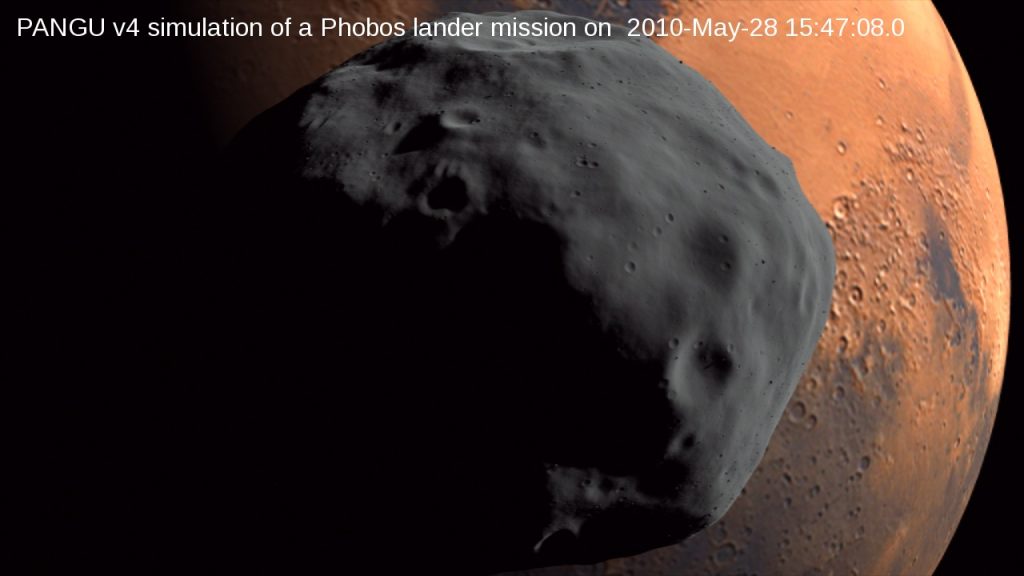 PANGU v4 simulation of a hypothetical Phobos lander mission on 2010-May-29 (on YouTube).

This video uses two PANGU-enhanced models of Phobos to simulate what it might look like from a camera on-board a hypothetical Phobos rendezvous and lander mission in 2010. The spacecraft approaches the trailing side of Phobos from the same orbit of Mars and then performs a fly-around of the equator at 40km altitude above the surface. Note that although the approach phase looks unrealistically straight, it is a curved (orbital) trajectory relative to Phobos during four complete orbits around Mars. The landing phase is split into two parts: a descent to the go/no-go decision point at an altitude of 10km followed by the descent to landing. The time taken to perform the slow descent means that lighting conditions change substantially during the video. The spacecraft trajectory and chosen period is artificial, but the position and orientation of all other bodies are real; time is mostly non-linear. 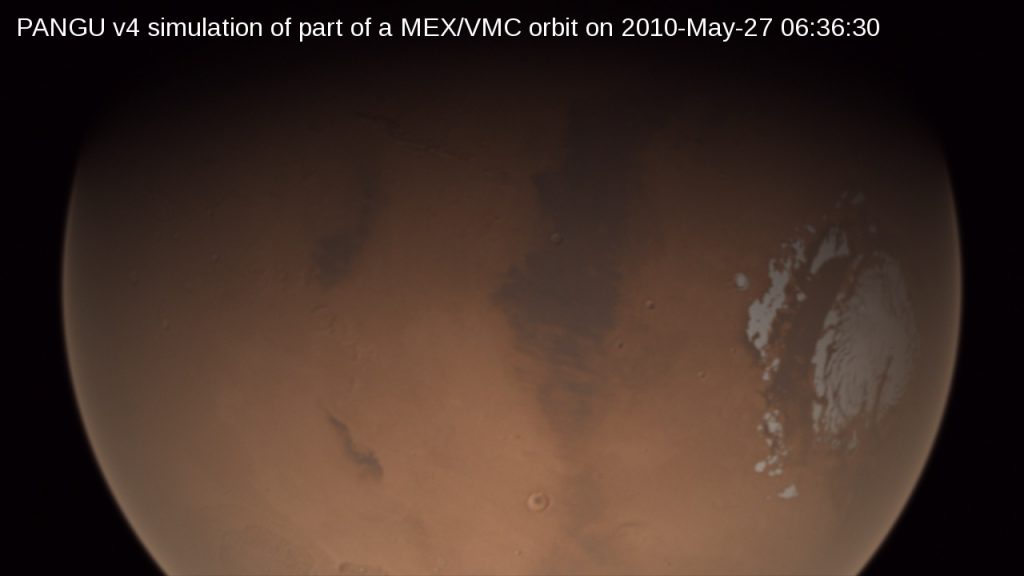 During the morning of 2010-May-27, the Visual Monitoring Camera (VMC) on board the Mars Express (MEX) spacecraft of the European Space Agency (ESA) captured a sequence of 600 images at 640×480 resolution approximately 40 seconds apart covering a complete orbit of Mars. Those images can be viewed on Flickr (opens in new tab). This video recreates that sequence using images generated by PANGU at 10 second intervals and replayed at 30Hz (300x real-time). Near the end of the video from 08:55:00 to 09:14:10 the transit of Phobos is observed from top to bottom. This can be seen on page 6 of the Flickr album (opens in new tab) e.g 10-147_09.11.35_VMC_Img_No_82.png (opens in new tab). Shortly afterwards the camera slews as MEX prepares for operations during the next orbit. The 1825 images for the main part of this video were created from a single run of PANGU v4.

The PANGU simulation consists of a Mars-textured sphere, an ICQ model of Phobos (Deimos is never in the field of view), a single scattering model of the atmosphere of Mars and a PANGU model of the VMC camera using known and estimated properties. NAIF/SPICE kernels define the position and orientation of the Sun, Mars, Phobos and the MEX/VMC camera at any point in time.